What is the Best Battery for a Campervan? AGM vs. Lithium

House batteries are an important element of any Sprinter camper van. A camper van battery setup is where energy from solar panels or an alternator is stored so that van lifers can enjoy comforts like lights, a fan, a fridge, and more—all while camping off-grid for long periods of time.

Your leisure battery bank needs to be up to the task of supplying consistent and reliable power in the demanding environment of your camper van. There are many options available for deep cycle, maintenance-free batteries, but among them, Absorbed Glass Mat (AGM) and lithium iron phosphate batteries (LiFePO4) are by far the most popular in camper van applications.

With recent technology improvements, lithium batteries have emerged as the clear frontrunner for campervans and motorhomes and are widely known as the best RV batteries. Lithium is the best type of battery for campervans because they are more efficient, have the longest lifespan, are safe to operate, are compact and light, and are cost-effective in the long run. 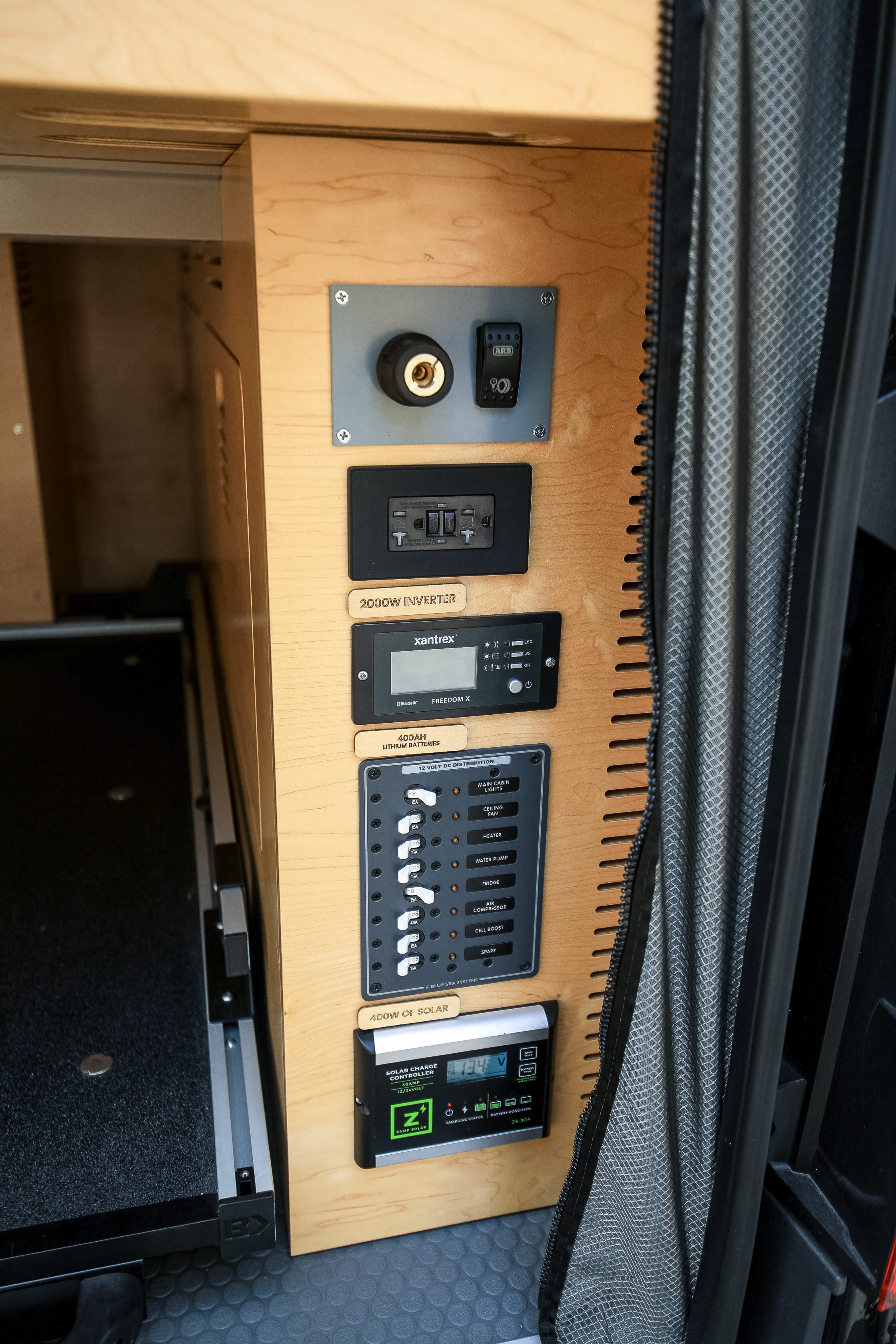 Lithium batteries are much more efficient than lead-acid batteries (the family of batteries to which AGM belong). Efficiency in batteries refers to the amount of energy lost during the charging process.

In van life applications, this disparity in efficiency is a big deal. Solar panels are mounted on the roof of the van, where there is limited space. It is critical that the maximum possible amount of solar energy that is absorbed by the panels and sent to the batteries with a solar charge controller ends up being converted into usable power for your van.

Because of their superior efficiency, lithium batteries charge faster than AGM batteries. This is an important advantage when you are camping off-grid without shore power and solar power is limited.

Lifespan might be the biggest strong point of lithium batteries. Battery lifespan is measured in charge cycles, or the number of times a battery can be discharged and recharged. While AGM batteries can handle up to 400 to 1000 cycles, depending on battery quality and depth of discharge (DOD), lithium batteries can manage around 5,000 to 10,000 cycles.

Both AGM and lithium batteries include technology to prevent overcharging. AGM batteries require ventilation to prevent the build-up of hydrogen gas. If this gas is allowed to accumulate, it can poison the air, cause battery damage, and, in extreme cases, lead to an explosion.

While issues with battery safety are relatively uncommon even with AGM batteries, there is no question that lithium is the safer choice. To protect your van and everyone inside it, lithium batteries are the way to go.

Weight is an important factor in any camper van conversion. Heavier builds put more stress on the van and lead to losses in performance and gas mileage. Suspension components, tires, and brakes may need to be replaced more frequently in vans that carry more weight.

Simply put, any opportunity to cut weight in a van build should be capitalized on. AGM batteries are very heavy when compared to lithium. In fact, when comparing two 12v 100ah batteries, the AGM option will be about three times heavier.

LiFePO4 batteries are also generally smaller than AGM deep cycle batteries that offer the same amount of usable energy, meaning you can save precious space and make your Sprinter van electrical system compact and discreet.

To understand how to compare the weight and size of different battery options, it is important to understand the differences among them in terms of their depth of discharge. 12V deep cycle batteries are sized in amp-hours(AH), and common sizes for 12V batteries include 100AH, 150AH, and 200AH.

A 100AH lithium battery and a 100AH AGM battery do not have the same amount of usable energy, and that is largely due to depth of discharge. In order to avoid long-term battery damage, AGM batteries can only be discharged to 50% of their capacity. In other words, a 100AH AGM RV battery only has 50AH of usable energy. Lithium batteries, on the other hand, can be discharged 80-100% without causing damage to the battery.

Thus, a 100AH lithium battery has up to twice the actual battery capacity of its 100AH AGM counterpart. This is one of the main reasons why lithium batteries are lighter and smaller. It also makes lithium batteries simpler to use, because you don’t need to constantly monitor them with a battery management system (BMS) and worry about discharging them too much.

While many camper vans have heaters in the cabin that can keep the batteries at a chargeable temperature, there are some situations where this will not be enough. If you go on ski trips or camp in cold climates frequently, you will need a solution that makes it possible to charge your campervan batteries in cold temperatures, even when you are away from your van and the heater is off.

Fortunately, lithium battery technology continues to improve and now there are high-quality batteries that can completely work around this issue.Muse & Co. Outdoors vans include four100AH Battle Born batteries that include a built-in heating system. These state-of-the-art batteries include a self-heating function that keeps them at a safe temperature for charging, even in cold conditions! The self-heating function completely negates the only major downside of lithium batteries.

When it comes to the cost breakdown of lithium vs. AGM batteries, the old adage is true: “You get what you pay for.” Lithium batteries are more expensive upfront than AGM batteries with the same capacity. But while a 100AH lithium battery might cost twice as much as a 200AH AGM battery, you still get far more value out of the lithium.

As discussed above, the battery life of lithium batteries is around 10 times longer than AGM. The math is simple: A battery that costs twice as much, but lasts 10 times as long, is actually five times cheaper. That’s not to mention all the other advantages of lithium, including smaller battery size and weight, higher efficiency, and greater safety.

To learn more about Muse & Co. Outdoors vans and all the top-of-the-line components included in our builds, check outour models.