Why You Don’t Need a Shower in Your Campervan Bathroom 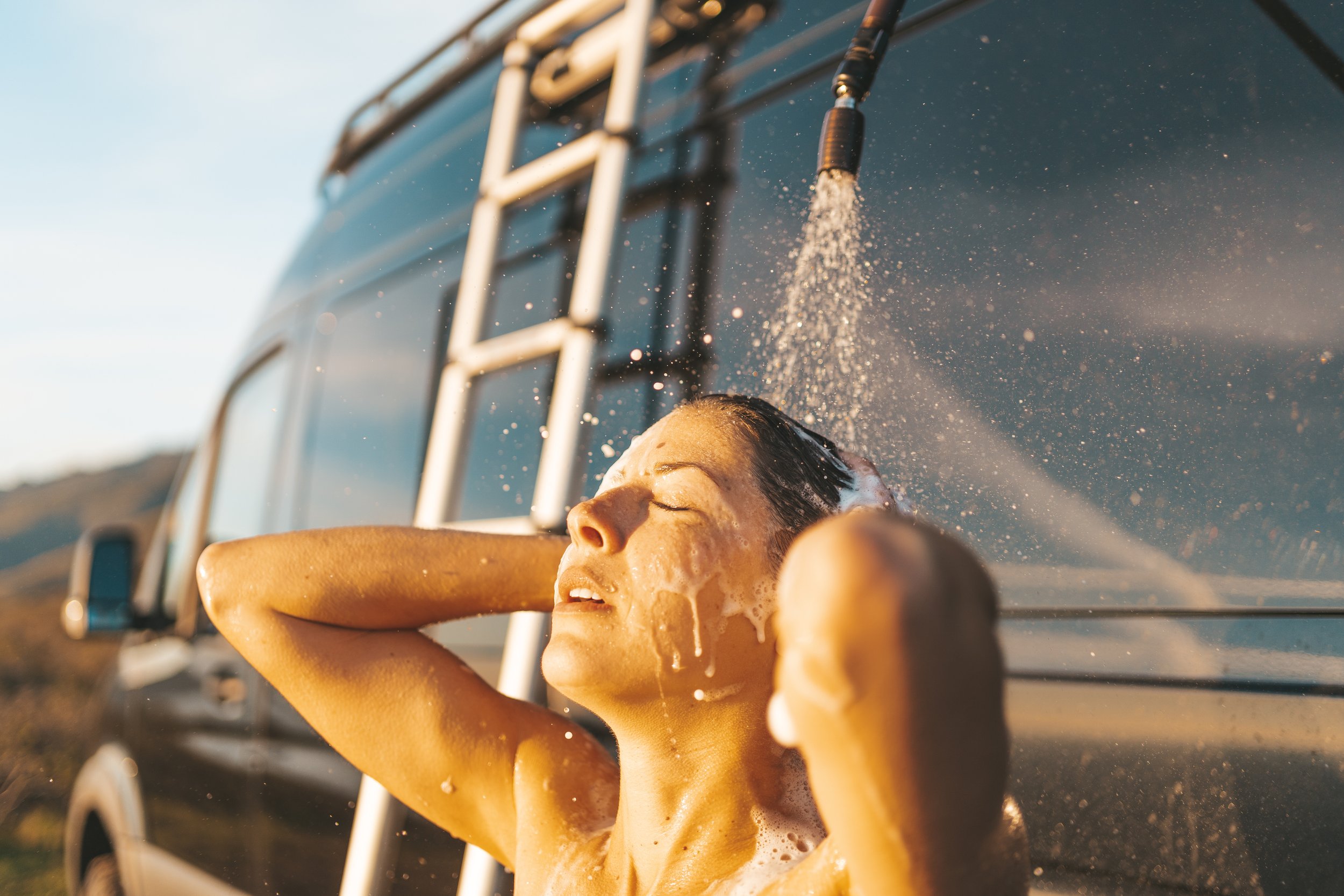 Sprinter camper vans are taking the RV and outdoor recreation worlds by storm, and many people are making the switch from traditional RVs and motorhomes to their more maneuverable, lower-profile Sprinter van counterparts. Van builders are coming up with some ingenious solutions to fit all sorts of amenities into the compact package of a Mercedes Sprinter van.

Every decision on what features to include in a van build has major repercussions on other areas of the build. While it is possible to fit most of the amenities you’d find in an RV inside of a Sprinter van, some features are better left out to improve the overall functionality of the camper van.

One of the major debates amongst van owners and builders is whether an indoor shower is worth the space and resources it requires. Many van owners want a shower, especially those who live in their rigs full-time. A common “bathroom” includes campervan toilet options like a cassette toilet or composting toilet. But do you need a full wet bath with an indoor camper van shower?

Space in a Camper Van is at a Premium

Let’s face it: while camper vans offer many amazing benefits over traditional RVs, they simply don’t have as much interior space. When deciding whether to include major interior components such as a full bathroom with indoor shower in this small space, one has to consider the impact it will have on the rest of the build.

If your bathroom design includes a shower, you will also need a water heater and a bigger fresh water tank to accommodate. Furthermore, you’ll need a bigger grey water tank, also called a holding tank, to accommodate the wastewater from a shower. These components can eat up living space and make your van’s floor plan awkward and cramped.

Indoor Sprinter camper van showers not only take up a massive amount of space and leave less room for other components, they also completely change the feng shui of your van’s interior by taking up so much vertical space from the floor to the ceiling. A shower will inevitably eat up space that could be used for your kitchen, a seating area, or storage. If your bathroom setup uses a shower curtain, you’ll need somewhere to store this wet and unsightly fabric while not in use.

What good is an indoor shower in your van if it doesn’t provide a steady flow of hot water? While it isn’t impossible to outfit a van with a large enough power and water system to provide hot water for a shower, it is somewhat illogical to do so.

Most van users want a shower on board so they can rinse off while camping off-grid, away from established campgrounds and areas with available showers. A Sprinter van conversion must have a big enough water tank and enough off-grid power to supply and heat water for showers, as well as provide water and electricity to the other components on board.

To accomplish this, both the water and off-grid electrical systems of your van must be modified and oversized. Doing so can be very expensive and, in some cases, the extra solar power needed might leave little or no space for gear on your van’s roof. 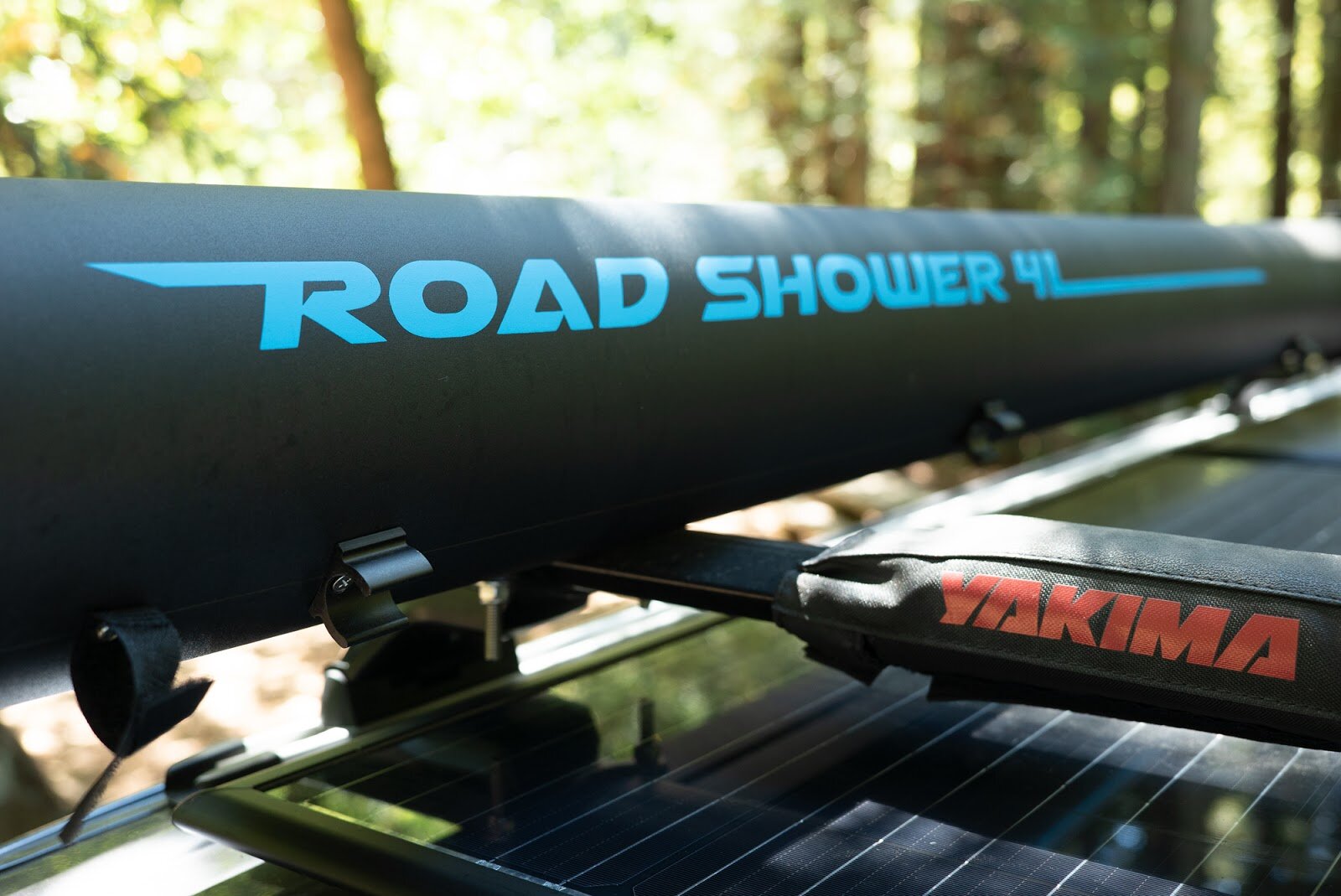 RV showers are notorious for causing owners major headaches, and there’s no reason to believe that those issues would magically disappear when indoor showers are installed in camper vans.

Even for the most expert camper van builders, issues like mold, leakage, and general repair problems are hard to avoid. Water has a way of finding every miniscule opening and penetrating, and trying to keep a shower system fully sealed in a moving, rocking, bumpy environment like a camper van is extremely difficult.

If you’re looking to have your Sprinter camper van built out by a professional conversion company like Muse & Co. Outdoors, you’ll find that most van builders offer warranties on the work they do. Unfortunately, indoor showers pose major warranty issues because of their susceptibility to leakage and other problems. Finding a van builder who will offer a warranty on a build with an indoor shower is difficult.

By now, you’re probably tired of hearing about why you shouldn’t install a shower inside of your camper van. If you’re reading this article, having a way to rinse off on the road is probably a priority for your van build.

Fortunately, there is a great alternative to an indoor camper van shower that avoids all the aforementioned issues and provides reliable hot water showers wherever you go. Muse & Co. Outdoors offers Yakima Road Showers as an available add-on to your roof rack-equipped van.

The Road Shower is an ingenious solution outdoor shower solution for camper van conversions. Its simple design uses passive solar energy to heat water in a roof rack-mounted tank. The tank can either flow with gravity, or if can be pressurized with an on-board air compressor (or bike pump if you want to do it manually) and provides on-demand hot water through an integrated shower head when needed. More than one Road Shower can be installed and plumbed together so you aren’t limited to 10 gallons of warm water. Many owners of Muse & Co. Outdoors vans that are equipped with a road shower like to accessorize with a free-standing pop-up shower stall so you can shower right outside your van in privacy.

The Road Shower is independent of your van’s water and electrical systems. It takes up no space on the interior of your van and avoids all of the potential nightmares of an indoor shower. When you consider all of these points, the Road Shower is a no-brainer alternative to an indoor camper van shower. Road Showers are popular on class B camper vans, offroad vehicles, airstreams, travel trailers, and other small road trip-mobiles.