The Truth About Campervan Electrical Systems 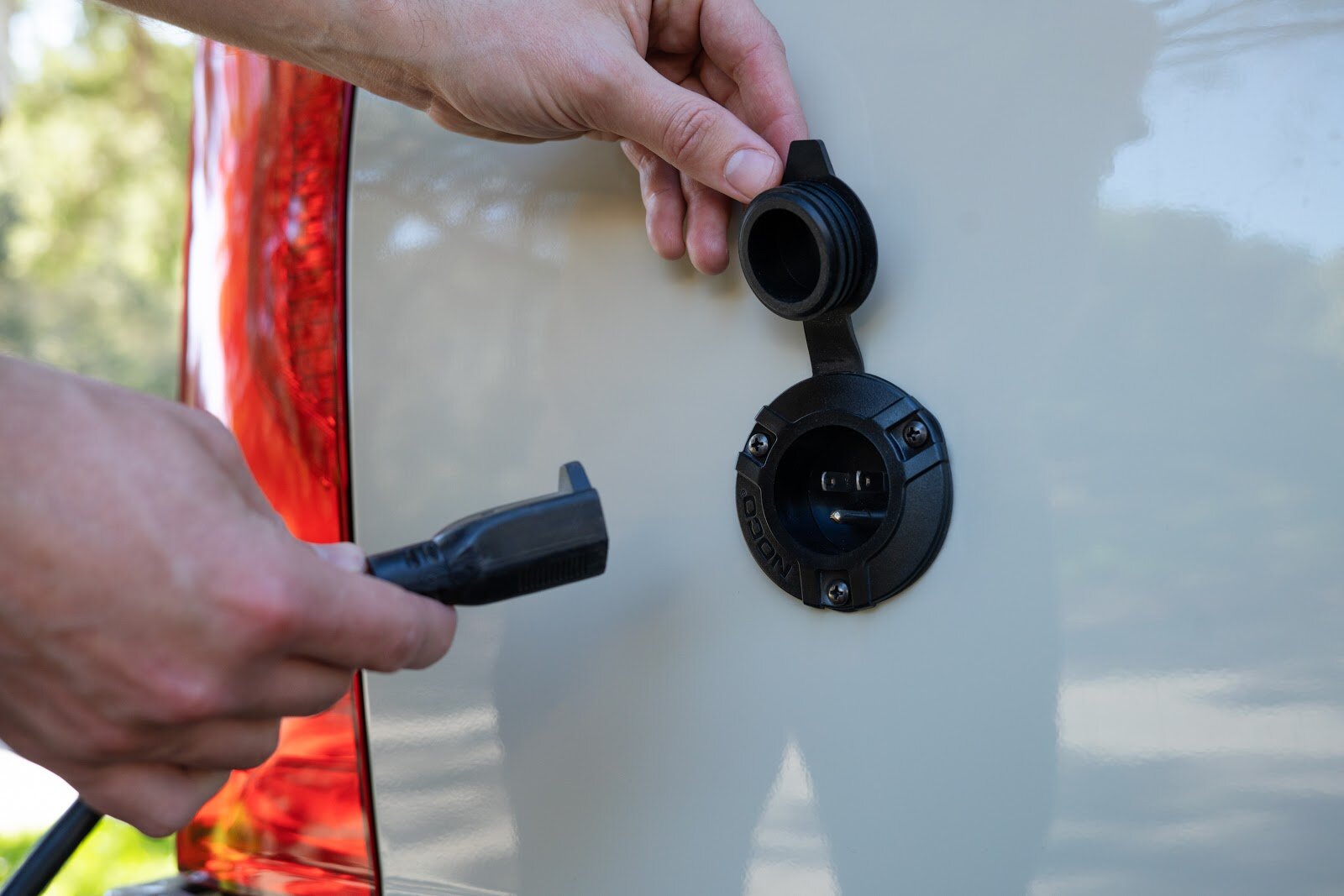 Having a source of electricity is a big part of what sets #vanlife apart from just camping. The ability to charge devices, power lights, and even heat your van on cold nights are all made possible by your camper van’s electrical system. But the system has limitations, too. Unlike the electricity in your house, your campervan conversion’s off-grid electrical system is not connected to a constant and virtually limitless source of power.

Camper van electrical systems are almost always 12-volt DC systems, so they use 12-volt DC batteries as their power source. The “leisure batteries” that are used to provide electricity in your van are similar to car “starter batteries”, but they are specifically designed for the type of use that is common in camper vans. 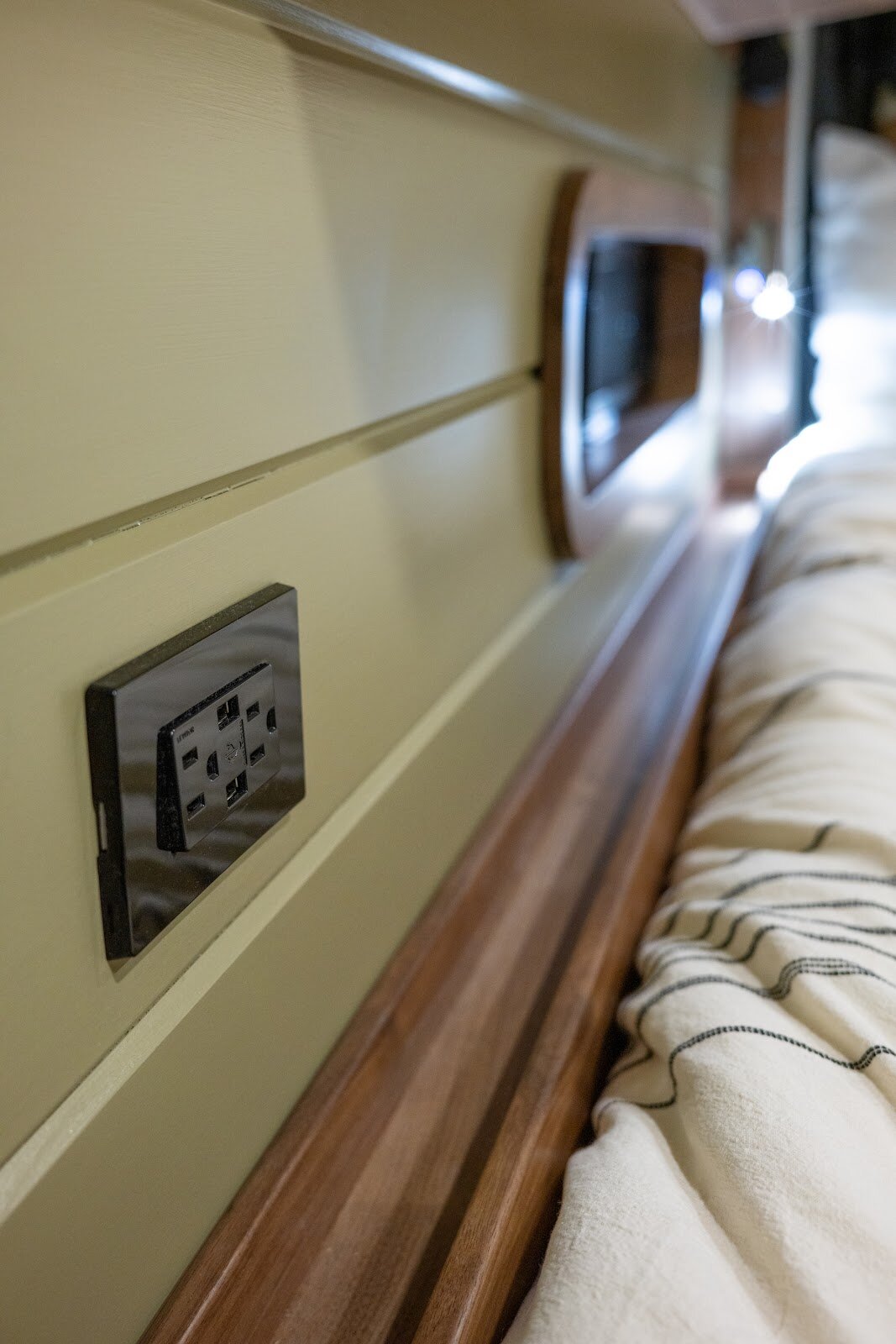 There are different types of batteries available that are suitable for use in camper vans. They are all considered “deep cycle” batteries. Some of the most common battery types used in vans are lithium, GEL, and AGM batteries (lead acid). Each has some pros and cons, but lithium batteries are widely considered to be the best option, as they offer the longest lifespan and the most capacity. They are also the most expensive.

Batteries vary in how much electricity they store, and it is common in camper vans to use anywhere from one to four or more, depending on what size battery they use. Storage in camper van batteries is measured in “amp hours”. The more battery capacity you have, the longer you can use the electricity in your van before needing to recharge the batteries. You should install a battery monitor in your van to keep track of how much power you have remaining at any given time.

Your camper van will be considered a 12V system, because the batteries you have will provide 12V DC power. 12V DC is different from the 110 or 120V AC power that you can access through the outlets in your home. 12V DC is common in RVs, boats, camper vans, and more.

All this means is that the loads you hook up in your camper van, such as your lights, fridge, and fan, must be 12V appliances. Anything that is meant to plug into a home electrical outlet, such as your blender or computer charger, requires AC power. It is possible to provide AC power through outlets in a van, but there are limitations to what can be powered. We’ll cover this topic in more detail in the ‘Loads’ section.

Your batteries will power all the loads in your camper van, but as they do so, they become depleted. Unless you have a way to charge the batteries, you will run out of electricity in your van. You don’t have to have only one charging source for your batteries; you can use multiple sources to charge them faster and ensure you have a backup plan if one isn’t working

The three most common ways to charge camper van batteries are: 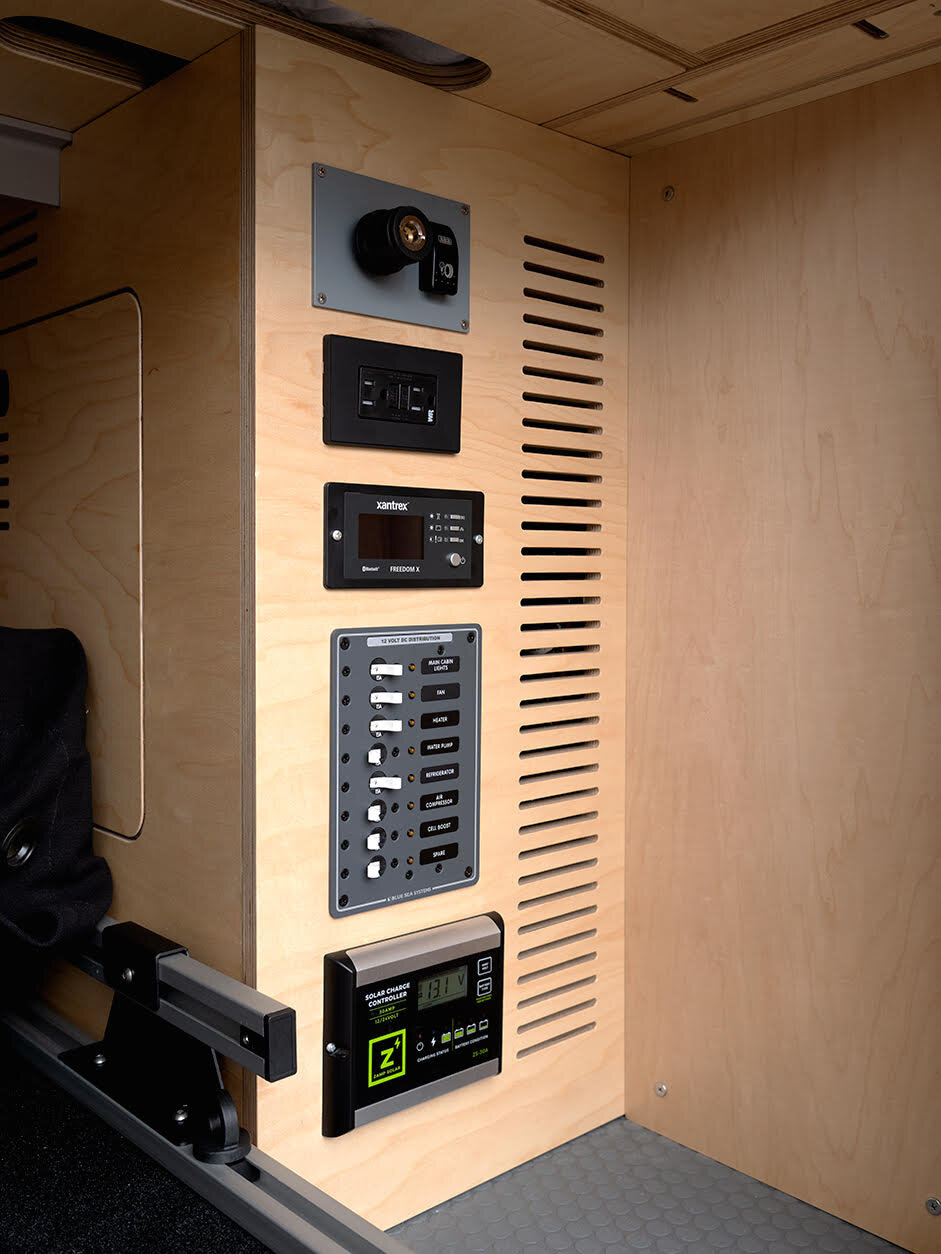 The loads of your camper van electrical system are all the things that you actually use in your van that require electricity. Common loads in a van include LED lights, a fan, a heater (which requires electricity to run but uses diesel or propane to actually provide heat), water pumps, a fridge, and 120V outlets for charging devices, etc.

Above, we mentioned that your camper van’s batteries provide 12V DC power. All of the appliances in your van, such as your lights and fridge, use 12V DC power – so they can simply be wired to the batteries to power them. If you want to charge devices and use small household appliances that plug into a regular household outlet, you need what’s called an inverter.

Inverters come in two main types, pure sine wave and modified sine wave. For most camper van systems, you’ll want a pure sine wave inverter as they can charge laptops without damaging them.

Inverters are useful for charging items like laptops and cell phones and powering small appliances like blenders.

You charging source, batteries, and loads are the three main components in your camper van electrical system. But many other smaller components are also critical to making the system work.

The following smaller components are likely to be included in your van’s electrical setup:

Having electricity in your van is a big part of what sets it apart from just camping. A fridge is so much better than a cooler, and overhead lights are infinitely nicer than a headlamp. But your entire camper van electrical system runs off of a handful (at a maximum) of batteries. As a camper van owner, you need to understand the limitations of your rig’s system to ensure that you don’t damage it or run out of electricity.

The two main mistakes that van owners make when it comes to their electrical systems are draining their batteries completely, and trying to use plug-in household appliances that require too much electricity. Every system is built to different specs and will be capable of handling different loads, so if you aren’t sure about what your van’s system is capable of, contact the builder.

In general, you can avoid issues with your camper van electrical system by monitoring the charge state of your batteries and avoiding the use of large household appliances. In certain situations, it might be necessary to go a bit out of your way to ensure that your van’s batteries stay charged. Examples include moving your van into the sun or taking a short drive if your batteries are low and you are relying on either solar or alternator charging.

Your inverter’s wattage rating will determine the maximum current you can draw through your van’s 120v AC electrical outlets when camping off-grid. But even if you are using an appliance that is below the maximum wattage allowed by your inverter, you can drain your batteries very quickly when using the 120v outlets. Certain appliances, such as space heaters, hot water kettles, and hair dryers, should be avoided entirely in camper vans. Your inverter won’t allow appliances over its maximum wattage rating to work, but you also shouldn’t run appliances near or at the limit for extended periods of time – because they will drain your batteries extremely quickly.

If you plan to have increased power needs in your van, you should talk to your builder about sizing up your system. The best way to accommodate a larger power draw is to add a larger battery bank. In certain scenarios, it may also be helpful to add greater charging capacity in the form of more solar panels or an alternator charger.

A Note About Air Conditioning

You may have seen camper vans that have a rooftop A/C unit installed. While there are A/C units available that run off of 12V DC power, it is highly impractical to build a camper van electrical system that is capable of running an A/C unit while camping off-grid. Most of the vans you see with A/C units are only able to use them when plugged into shore power.

The power draw of a rooftop air conditioner is simply too large to be accommodated by an off-grid camper van electrical system. The number of batteries and solar panels that would be needed to reliably use the A/C unit off-grid would take up an impractical amount of space in the van. If you plan on camping mainly at RV parks or in driveways where shore power is available, you could consider installing an A/C unit on your van’s roof.

We hope this article helped you clear up some of the most common questions about camper van electrical systems! To learn more about Muse & Co. Outdoors’ systems, head over to our details page. And, keep an eye out for our next post in this series, which will explain in detail what is included in our vans’ electrical systems, and what options are available to add on.